Company Royal Foam successfully works 17 years in the world market. Royal foam the industrial company of a complete cycle of production of polyfoam and items from it. Highest quality of materials, speed of work and creative allocate our company among competitors.

Geofoam is expanded polystyrene or extruded polystyrene manufactured into large lightweight blocks. The blocks vary in size but are often 2 m x 0.75 m x 0.75 m. The primary function of geofoam is that of separation typically between foundation soils and an overlying highway or parking lot. Geofoam is also used in much broader applications, the major ones being as lightweight fill, compressible inclusions, thermal insulation, and (when appropriately formed) drainage. 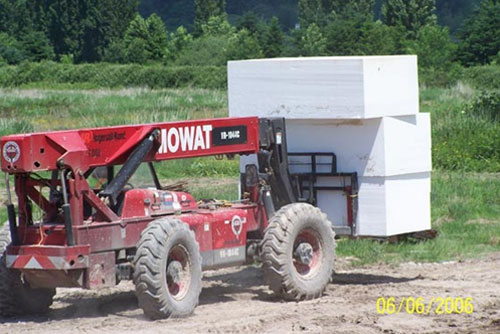 It should be noted that the area of geofoam can nicely seque into geocombs, previously called ultralight cellular structures which Horvath defines as “any manufactured material created by an extrusion process that results in a final product that consists of numerous open-ended tubes that are glued, bonded, fused or otherwise bundled together.” The cross-sectional geometry of an individual tube typically has a simple geometric shape (circle, ellipse, hexagon, octagon, etc.) and is of the order of 25 mm across. The overall cross-section of the assemblage of bundled tubes resembles a honeycomb that gives rise to its name. Presently, only rigid polymers (polypropylene and PVC) have also been used as geocomb material. 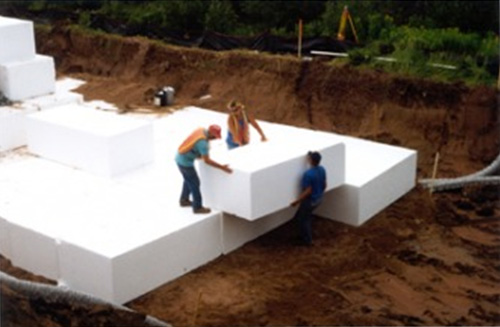 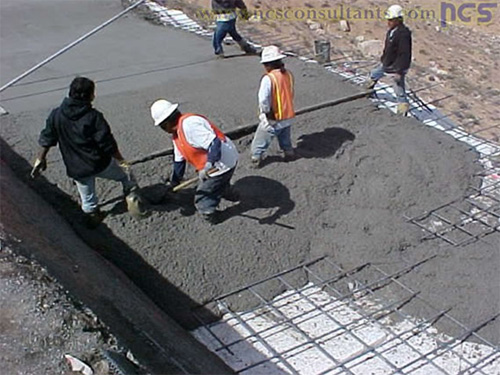 Traffic congestion on highways in the United States continues to be an area of concern to the traveling public. Every year, congestion continues to grow as vehicle travel increases and the Nation`s bridges and roads deteriorate. To help alleviate this growing congestion, capacity on the Nation`s highways and major roads must be expanded. In many circumstances, however, roadway embankment widening or new alignments may require construction over soft or loose soils that are incapable of supporting increased loads. Embankment construction projects must identify innovative materials and construction techniques to accelerate project schedules by reducing vertical stress on the underlying soil.

Solution: Get in, get out, and stay out with expanded polystyrene (EPS) geofoam

What is EPS geofoam? EPS geofoam is a lightweight, rigid foam plastic that has been used around the world as a fill for more than 30 years. EPS geofoam is approximately 100 times lighter than most soil and at least 20 to 30 times lighter than other lightweight fill alternatives. This extreme difference in unit weight compared to other materials, makes EPS geofoam an attractive fill material. Because it is a soil alternative, EPS geofoam embankments can be covered to look like normal sloped embankments or finished to look like a wall.

What are the advantages of EPS geofoam for highway construction?

EPS geofoam can be used as an embankment fill to reduce loads on underlying soils, or to build highways quickly without staged construction. EPS geofoam has been used to repair slope failures, reduce lateral load behind retaining structures, accelerate construction on fill for approach embankments, and minimize differential settlement at bridge abutments.

Because EPS geofoam weighs only 16 to 32 kilograms per cubic meter (1 to 2 pounds per cubic foot), large earthmoving equipment is not required for construction. After the material is delivered to the site, blocks easily can be trimmed to size and placed by hand. In areas where rightof- way is limited, EPS geofoam can be constructed vertically and faced, unlike most other lightweight fill alternatives. It also can be constructed in adverse weather conditions.

<td”>
Putting It in Perspective

Many States have used EPS geofoam in large and small highway projects.

By using EPS geofoam as a lightweight fill, engineers at the Minnesota Department of Transportation (DOT) have realized significant time and cost savings for a number of small and moderate-sized roadway embankment projects over deep, soft organic soil deposits prevalent in the State.

After years of searching for a permanent solution to a failing slope problem on State Route 23A, New York State DOT turned to EPS geofoam. By replacing upper sections of the slide area, the State significantly reduced the driving forces that were causing the slide and successfully rehabilitated the roadway section.

Two large and high-profile jobs–the Big Dig in Massachusetts and I-15 in Utah–turned to EPS geofoam to construct large embankment sections. EPS geofoam helped the projects maintain extremely tight construction schedules that would not have allowed enough time for conventional embankment construction. Both projects illustrated the ease and speed with which EPS geofoam can be constructed for highway embankments.

This technology is a lightweight, rigid foam plastic that is approximately 100 times lighter than most soil, and at least 20 to 30 times lighter than other lightweight fill alternatives. This extreme difference in unit weight, compared to other materials, makes EPS geofoam an attractive fill material to significantly accelerate construction schedules.

By October 2008, EPS geofoam will be a routinely used lightweight fill alternative for State DOTs on projects where the construction schedule is of concern.

EPS geofoam has been used on roadway projects in more than 20 States. The FHWA Resource Center has developed a half-day seminar on EPS geofoam and has presented the seminar in approximately 10 States. A guideline specification for State DOTs is being revised and updated to reflect trends in the industry and fluctuations in the cost of materials. In addition, an innovations and advancements report is being prepared to highlight state-of-the-art developments in the use of EPS geofoam as a lightweight fill material.

By Geofoam quickly and reliably build bridges and bars of flights, on areas with swampy or unsteady soils. Fill underground emptinesses, for example building foundation.

Company Royal Foam is unique decision for our clients. 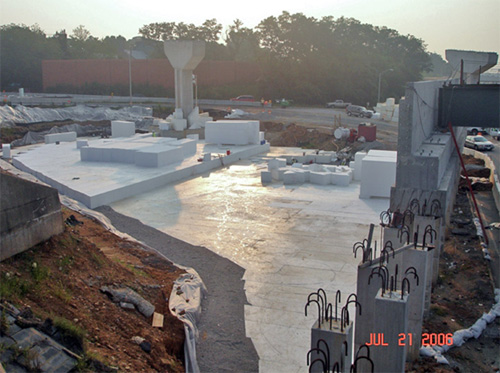 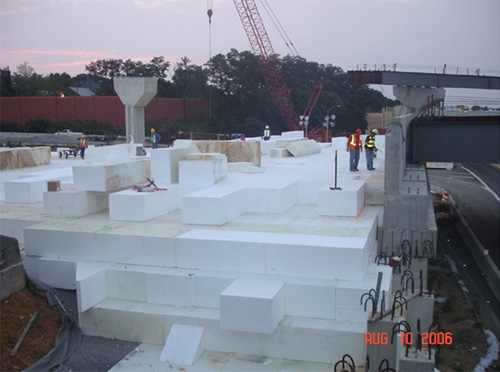